Continue the Tour by Car

Continuing the Macdonald Tour by Car, Bus, or Bicycle

YOU CAN DOWNLOAD A PDF COPY OF THE TOUR HERE

After you’ve discovered what life was like for John A. Macdonald in Picton from 1833 to 1834 by taking the self-guided walking tour, you may want to drive further to visit the historic sites nearby in the Quinte region where Macdonald lived.

You’ll need a full day to take the tour by car or bus. Using a map or GPS, plan a trip from Picton to Glenora to start. You should end up back in the County at the end of the driving tour in a town called Hillier south of the Murray Canal.

To begin, proceed by car east on the Loyalist Parkway to Glenora. John A. Macdonald would walk this five-mile stretch of highway to his home at Glenora (sometimes barefoot to save shoe leather). It’s a walk or drive well worth taking along the south shore of the Bay of Quinte toward Adolphus Reach.

1. Just before you reach Glenora, turn right and drive up the escarpment to picturesque Lake-on-the-Mountain. John’s father Hugh operated a fulling and carding mill near the present day Miller House, now a charming café where you can stop to take in the spectacular view and enjoy a light meal.

2. The Stone Mills of Glenora where Hugh Macdonald ran a grist-mill from 1830-1836. Please see the video John A. Macdonald – The Quinte Years to learn about his life in this part of Canada. 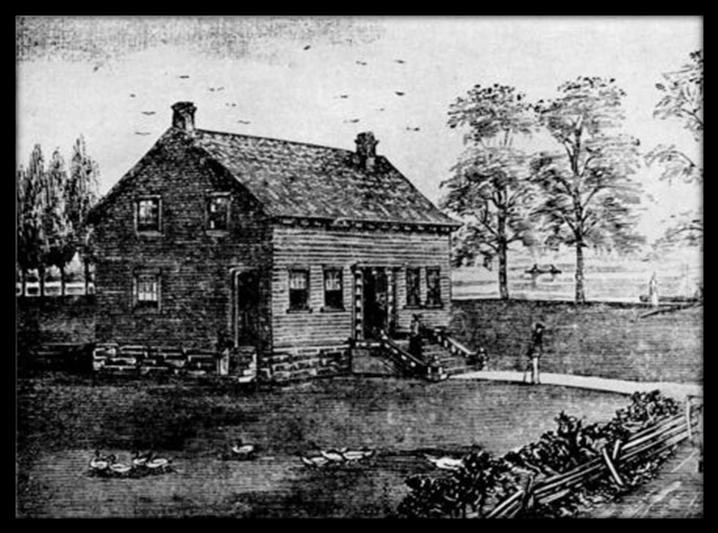 5. Drive east on South Shore Drive to County Rd. 8 and drive east (left) to Napanee. Visit the Macpherson House museum in Napanee, (180 Elizabeth Street), where John A. lived with his cousin Allan Macpherson, the “Laird of Napanee.” Plan to tour this historic Georgian home while you are visiting Napanee.

6. Drive west out of Napanee on the historic King’s Highway (Hwy. 2) from Napanee to Trenton and then drive south on Highway 33 on what becomes the Loyalist Parkway to the historic Murray Canal. Highway 2, as you can tell by its number, is the oldest highway in Ontario. (There is no number Highway 1).

7. Continue on the Loyalist Highway to the bridge at the Murray Canal and turn east to Twelve O’Clock Point. On this site on October 6, 1886, Sir John officiated at the preliminary opening of the Murray Canal. Although the official opening didn’t occur until August 15, 1889, the prime minister wanted to demonstrate that he kept his promises to the people of the Bay of Quinte area. This canal opened up the Bay of Quinte to Lake Ontario and helped the area to prosper.  The opening of the canal effectively turned Prince Edward County from a peninsula (similar to nearby Presqu’ile Provincial Park) into an island, the second largest in the Great Lakes. 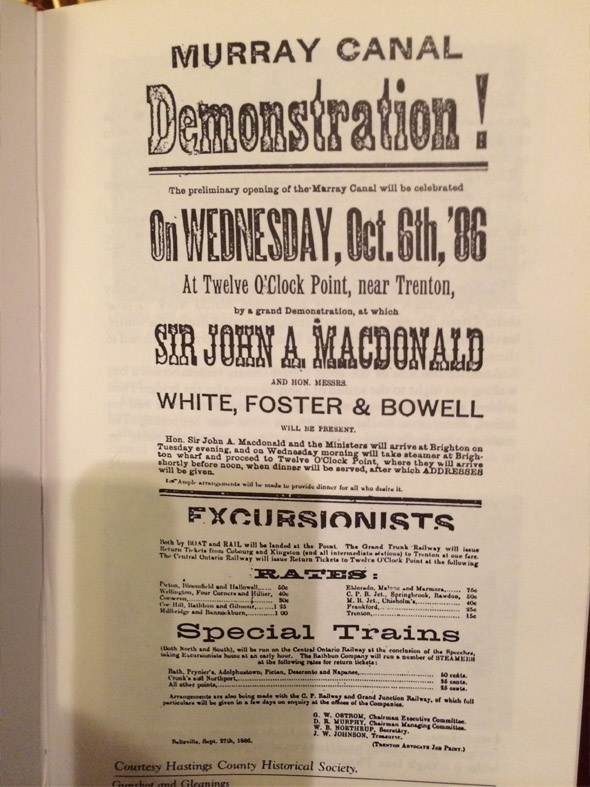 Preliminary Opening of the Murray Canal

Sir John A. had just returned from a long trip with his wife across Canada by train to Victoria B.C. to drive the last spike in the Esquimalt to Nanaimo Railway at Cliffside, Shawinigan Lake in August 13, 1886.

8. Finally drive south to Hillier by crossing the Murray Canal on the Loyalist Parkway. John A. Macdonald visited his cousins Lowther Pennington Macpherson, John Alexander Macpherson, and Mary Ann Whitten. They all lived at one time in Hillier. Lowther convalesced here with his brother John during his long illness. John Alexander Macpherson owned a number of businesses and much of the land in the village then known as Dorland’s Creek or Slab Creek. John visited Mary Ann and stayed with her family for many years after the Macphersons had left the village. Stop at the Hillier House to find out more about the town of Hillier. Suggested reading about Macdonald’s family connection with Hillier: On the Edge of History by E.D. Taylor Ashton. 1996.