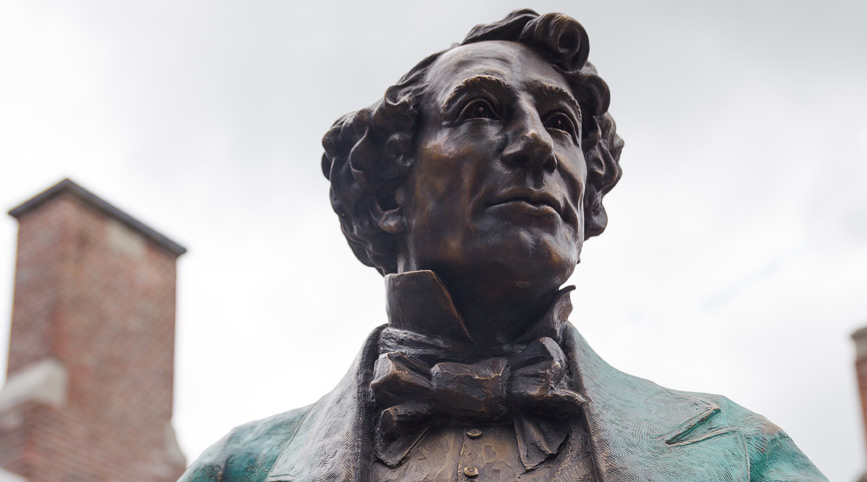 RETURN OF JOHN A. MACDONALD QUINTE BOY ON HIS 200th Birthday

The Macdonald Project of Prince Edward County announced today that the much anticipated unveiling of Canada’s 10th public sculpture of Sir John A. Macdonald will take place in front of the Armoury in historic downtown Picton, July 1st at 2 p.m. as part of the official Canada Day festivities. It’s party time in the County.

Patrice Dutil, one of Canada’s leading authorities on Macdonald and president of the Champlain Society of Canada, will act as master of ceremonies for the dedication ceremony. Award winning actor, R.H. Thomson will re-enact one of the most famous speeches in Canadian history: Sir Wilfrid Laurier’s famous speech to the House of Commons celebrating the life of Macdonald.

Brian Porter, playing Sir John A. Macdonald, will remember the good old days in the County and with his wife, Agnes, he’ll stroll down Main St. as a reminder of “some of the happiest days of his life” spent in the County.

Treasurer and CEO of the Law Society of Upper Canada, Hon. Janet Minor will speak on Macdonald’s career as a lawyer and a lawmaker, and his early attempt to grant the vote to women years before other world leaders.

Justice Robert Sharpe of the Ontario Court of Appeal will speak about Macdonald and the Canadian Constitution.

Mayor Quaiff will join Ruth Abernethy, Daryl Kramp, Hon. Janet Minor and David Warrick in unveiling the sculpture. This will be followed by Mayor Quaiff’s acceptance of the gift of the sculpture from The Macdonald Project on behalf of the County of Prince Edward. He will then cut a birthday cake for Sir John A. Macdonald.

To acknowledge Macdonald’s central role in building the CPR railway and in uniting Canadians coast to coast, the Regent Theatre will open its doors to two free showings of Stephen Low’s spectacular IMAX formatted film Rocky Mountain Express at 3:30 p.m. and 5 p.m. Each showing will last one hour.

In addition to the Macdonald activities, the Picton Canada Day Committee, led by members of the Picton Business Improvement Association, Picton Recreation Committee, Picton Legion, Eph*ra Event Design, “Come Alive Outside Program” and Emmanuel Baptist Church will be offering a full lineup of July1st celebrations – everything from sidewalk sales and entertainment to a free kids’ carnival at Benson Park.

Warrick comments: “It is only fitting that this sculpture be located in the heart of historic downtown Picton where people meet and greet one another. Macdonald began his career in law and public administration here as a teenager. He actually became an attorney in Picton and practiced law here before moving to Kingston – something we discovered only recently. He also volunteered as secretary for the first school board, the agricultural society and the young men’s debating association. These civic groups met, interestingly enough, in the popular Hopkin’s Tavern across the street from the Armoury at the corner of Ross and Main.

“The sculpture will be unveiled in front of the Armoury built for the Prince Edward Militia in 1914. Sir John A. Macdonald had a close connection with the early militias as a soldier, and legal counsel after the 1837 rebellion. He also played a vital role in Canada’s defence as Minister of Militia. Many soldiers from the Hastings Prince Edward Regiment known later as the Hasty P’s paid the ultimate price for freedom when they helped liberate Holland from Nazi oppression 70 years ago this month in May 1945. Ask member of the Royal Canadian Legion across Canada what this date means to them and then ask anyone of Dutch ancestry what these soldiers mean to them.”

Local resident Justice George Inrig said, “I support the installation of the work in front of the Armoury built for this proud and much decorated regiment. It’s part of our history.” Wear your red and white proudly on Canada Day — and if you feel proud of your history add a little blue to remind us of where we came from.